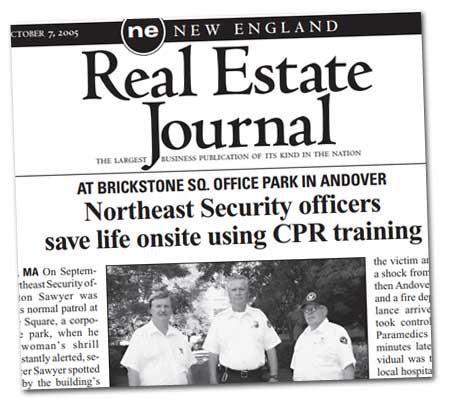 ANDOVER, MA On September 14, Northeast Security officer Milton Sawyer was walking his normal patrol at Brickstone Square, a corporate office park, when he heard a woman’s shrill scream. Instantly alerted, security officer Sawyer spotted a woman by the building’s front entrance screaming for help. Sawyer rushed to the scene and found an unconscious man lying face down in a flower bed. He quickly checked the individual for life signs and radioed fellow security officer Barbara Hain to call 911 and relay that there was a “code 3, man down and it appeared he was suffering a heart attack.” Upon closer inspection, Sawyer  observed that the victim indeed was not breathing and gasped for air a couple of times. Sawyer, who holds a CPR certificate from Northeast Security, carefully cleared mulch from the individual’s mouth and opened the individual’s airway by tilting his head back and lifting his chin up. After checking for breathing and signs of circulation and finding no sign of circulation, Sawyer administered two rescue breaths to the victim and then checked again for signs of circulation. Sawyer, who still observed no signs of circulation, commenced performing chest compressions. He was soon assisted by a passerby, Alan Sewell, who took over compressions as Sawyer administered mouth-to-mouth breaths. Fellow Northeast Security officer Joseph Sifferlin arrived on the scene and secured the area from traffic. Next Northeast Security officer Paul Bailey and Unicare nurse Donna Regatti arrived on the scene with automated external defibrillators (AED). Nurse Regatti attached an AED to the victim, while security officer Bailey took over chest compressions from Sewell and Sewell in turn took over the breaths in relief of Sawyer. The nurse cleared the victim and administered a shock from the AED. Just then Andover police officers and a fire department ambulance arrived on site and took control of the scene. Paramedics arrived a few minutes later and the individual was transported to a local hospital. “My training just took over. It felt like a lifetime from when I started performing CPR to the time the police arrived, although it was only five minutes,” said Sawyer. A police officer on scene notified Sawyer that the man was breathing and had a pulse when he was transported. The officer also said that the Northeast Security officers did a great job responding to the victim and that he may not have made it without the medical assistance they provided. Sawyer received his CPR training and certificate in a course taught at Northeast Security by vice president of external operations, Andréa Kingston.